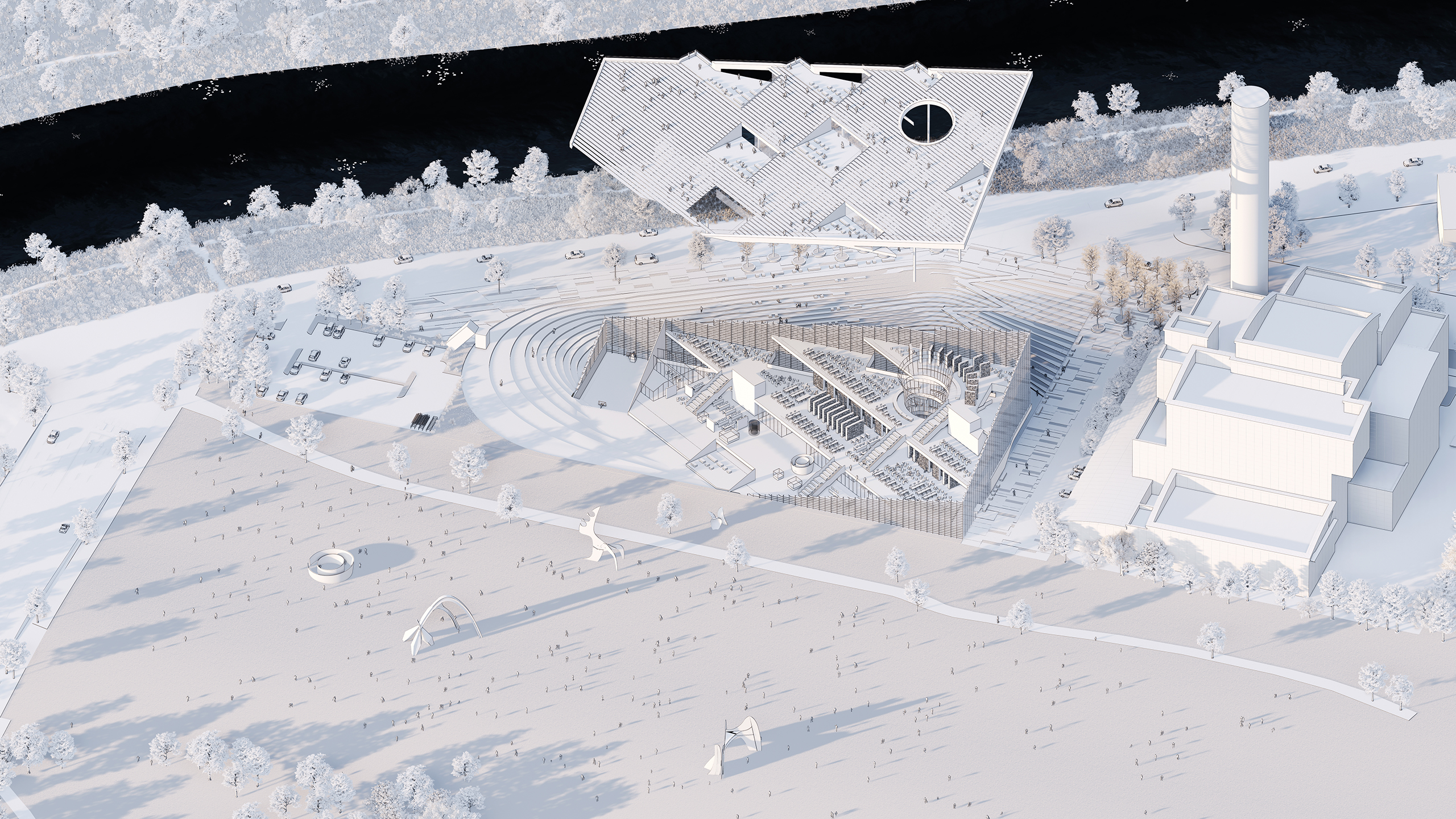 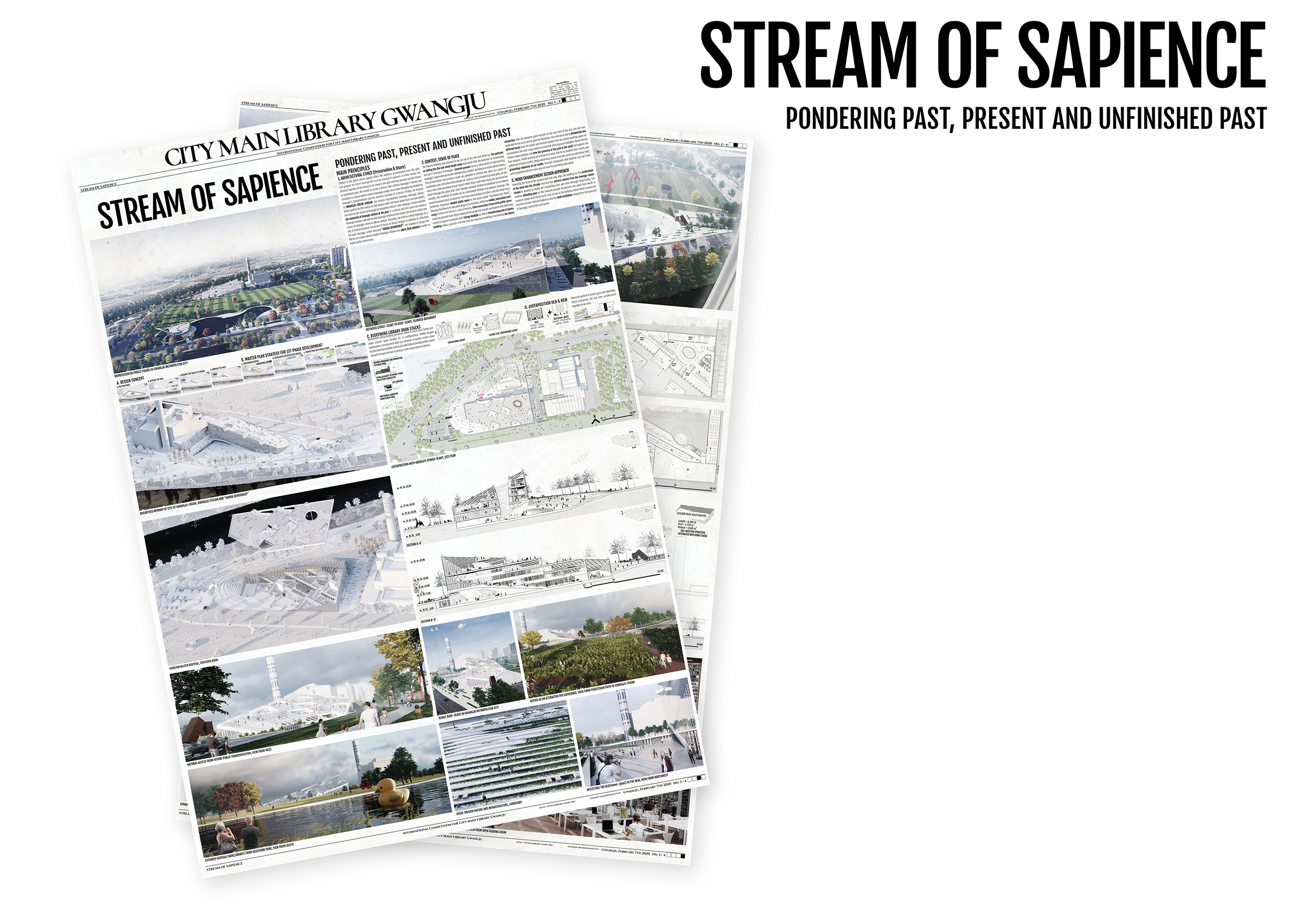 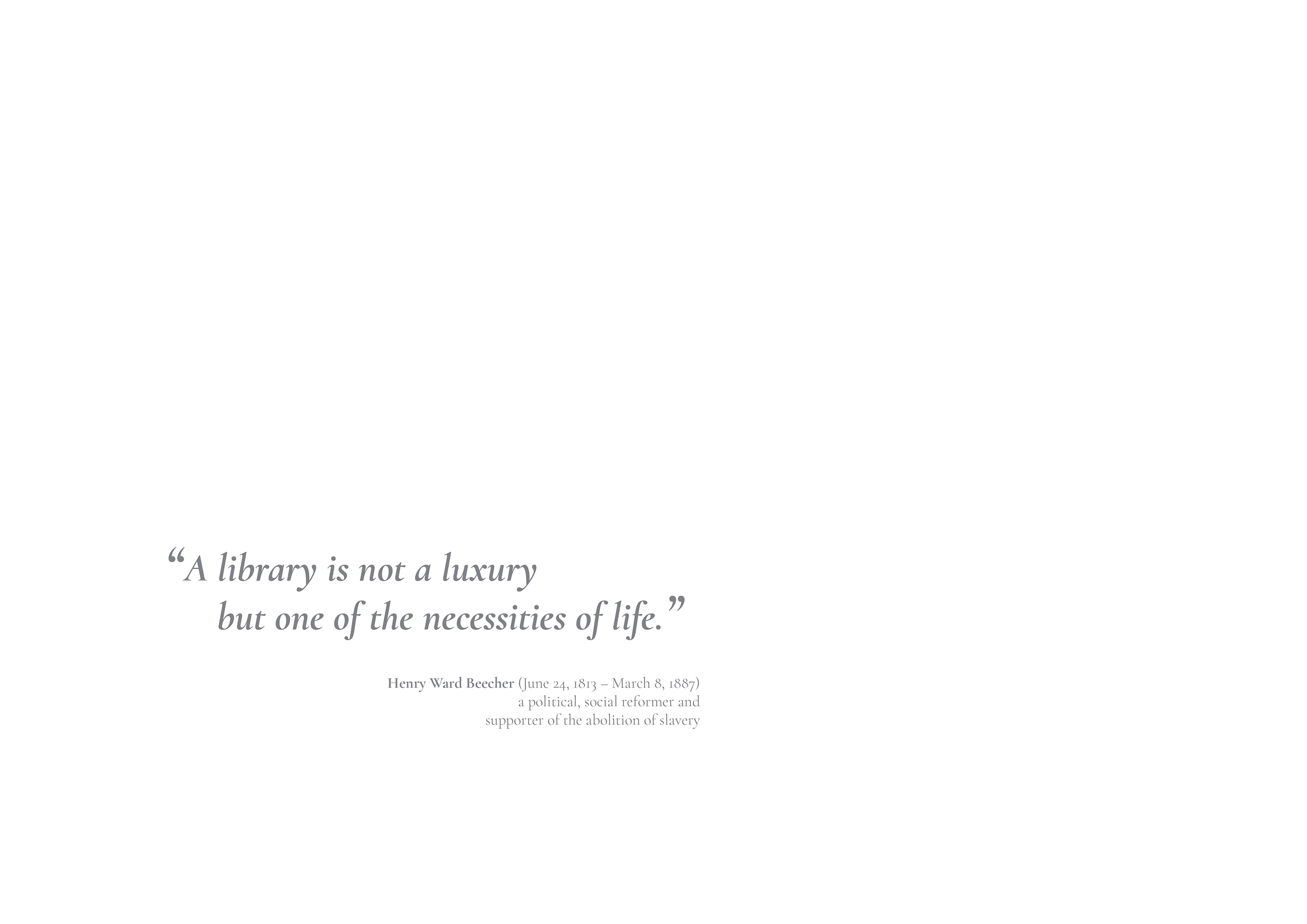 1. Architectural Ethics (Preservation & Share)
Library is the space where people share the sapience accumulated from the past and prepare for future through the current sharing of sapience. In other words, the intrinsic function of the library is to connect the past with the present and the future as unfinished past. We aimed to create a library that reflects Gwangju’s history and functions as a place where modern Gwangju people share their thoughts by combining Gwangju’s characteristics and the intrinsic function of a library. Firstly, we focused to Gwangju-cheon stream, the stream representing Gwangju. Gwangju-cheon, which used to be 130 meters to 300 meters wide (10 times wider than current width), has been at the center of Gwangju metropolitan citizen’s life. Gwangju-cheon contains the memories of Gwangju citizens in the past, is a culture and rest space for modern Gwangju citizens, and will be with Gwangju citizens in the future. We tried to reflect the traces of Gwangju-cheon in library design. Secondly, we tried to reflect Gwangju as a city of democratization movement of Korea in library design. In addition to reflecting the past Gwangju, which elevated “Agora democracy”, we wanted to design the library as a space where modern Gwangju citizens can share their wisdom in order to realize better democracy. 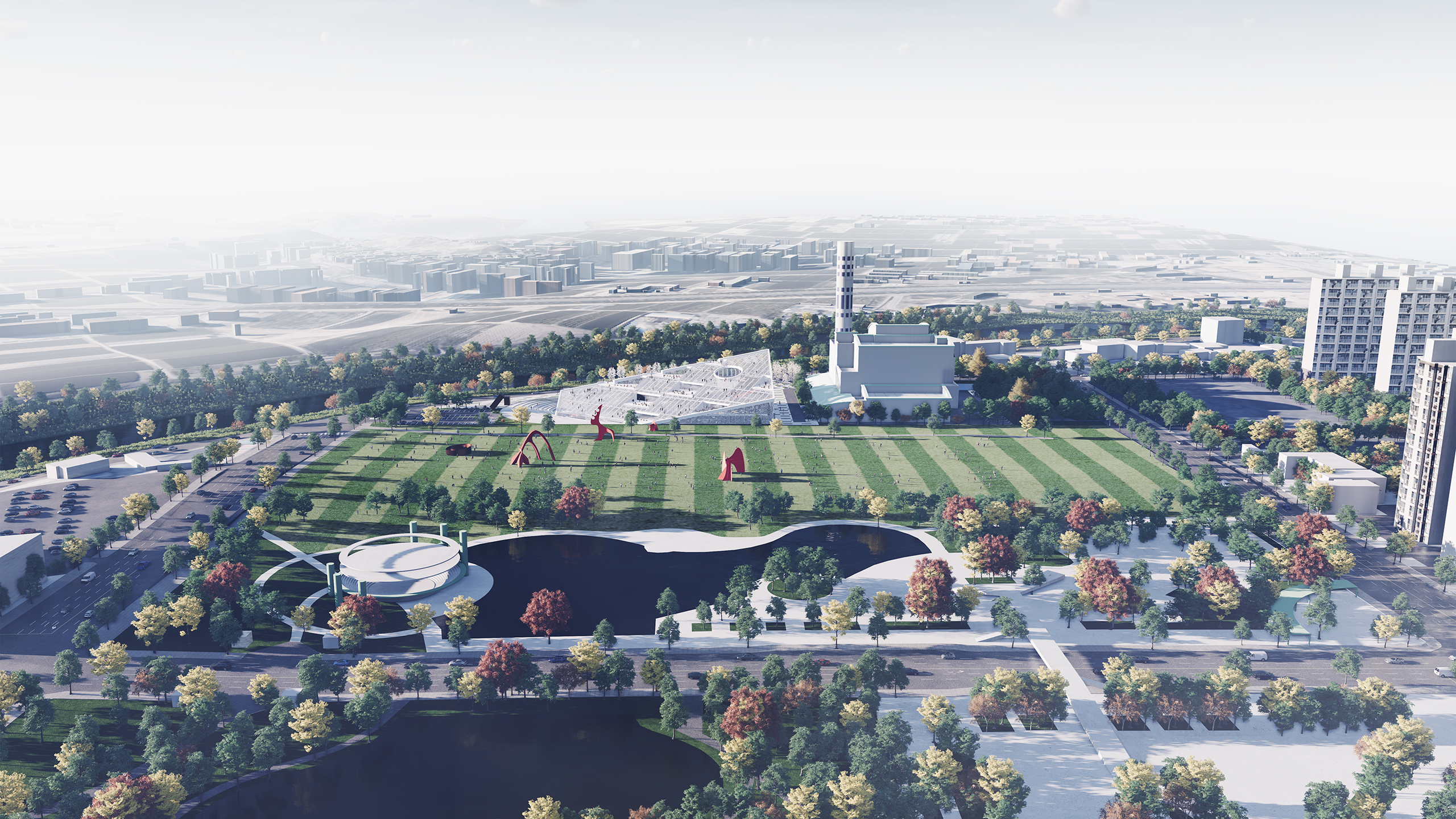 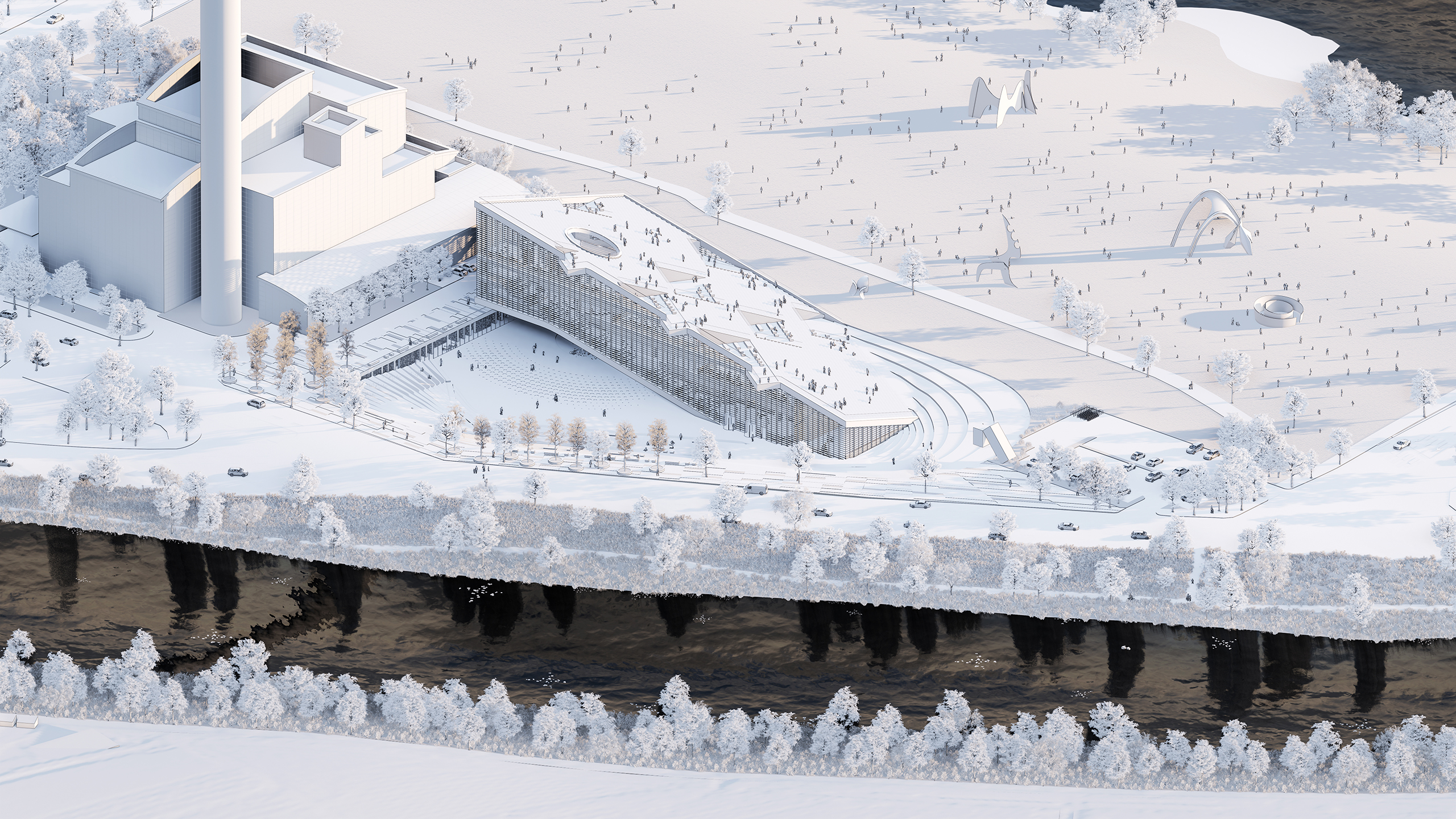 2. Context, Sense of place
The library building was planned to be cut out of the site and lifted up. The gestures of cutting the site and raised single mass associated with the behavior of reminiscing the past’s memory in Gwangju. Lowered ground can be a plaza which is representing Gwangju’s Agora democracy for multiple uses, shelter, and dance or music performance.
The preservation and archive rooms are planned to bestow the users to a place of meditation and reflection while people sit, read or rest in lowered ground plaza. At the same time with providing visual impact while they could walk along the preservation room through the glass wall. Even though valuable archive is exhibited to all visitors visually, the condition of media can be maintained without any physical damage. The lowered ground plaza created for the future demanding of visitors and the lifted mass facilitates maximum shaded public space in the plaza called “Reminiscence Plaza”, allowing the library to take advantage of its location, while the visible, interactive roof-scape, reflects the library’s radical identity, fluid connections from south public space. Lowering ground level allow underground programs except mechanical and electrical rooms to expose to outside and it brings daylight as well as transforming into 5 stories building unlike a generic 4 stories and one basement building. Considering the future connection with the obsolete plant located on the east side of the site, the site was separated to use as an access path for librarians. East entrance clearly divided into two different levels from the public and located closely from the service parking space for convenience. The roof-scape which is consisted with steps and skylights allows library visitors enjoy daylight and view the greenery of the park to the south throughout the four seasons. Public parking lot is located in west side to be isolated from noises and pollutants of heavy traffic. While welcoming access from the north on pedestrian level, preventing nuisances of car traffic, benches integrated with bollards and tall trees were populated and the mass was set back for providing open plaza. 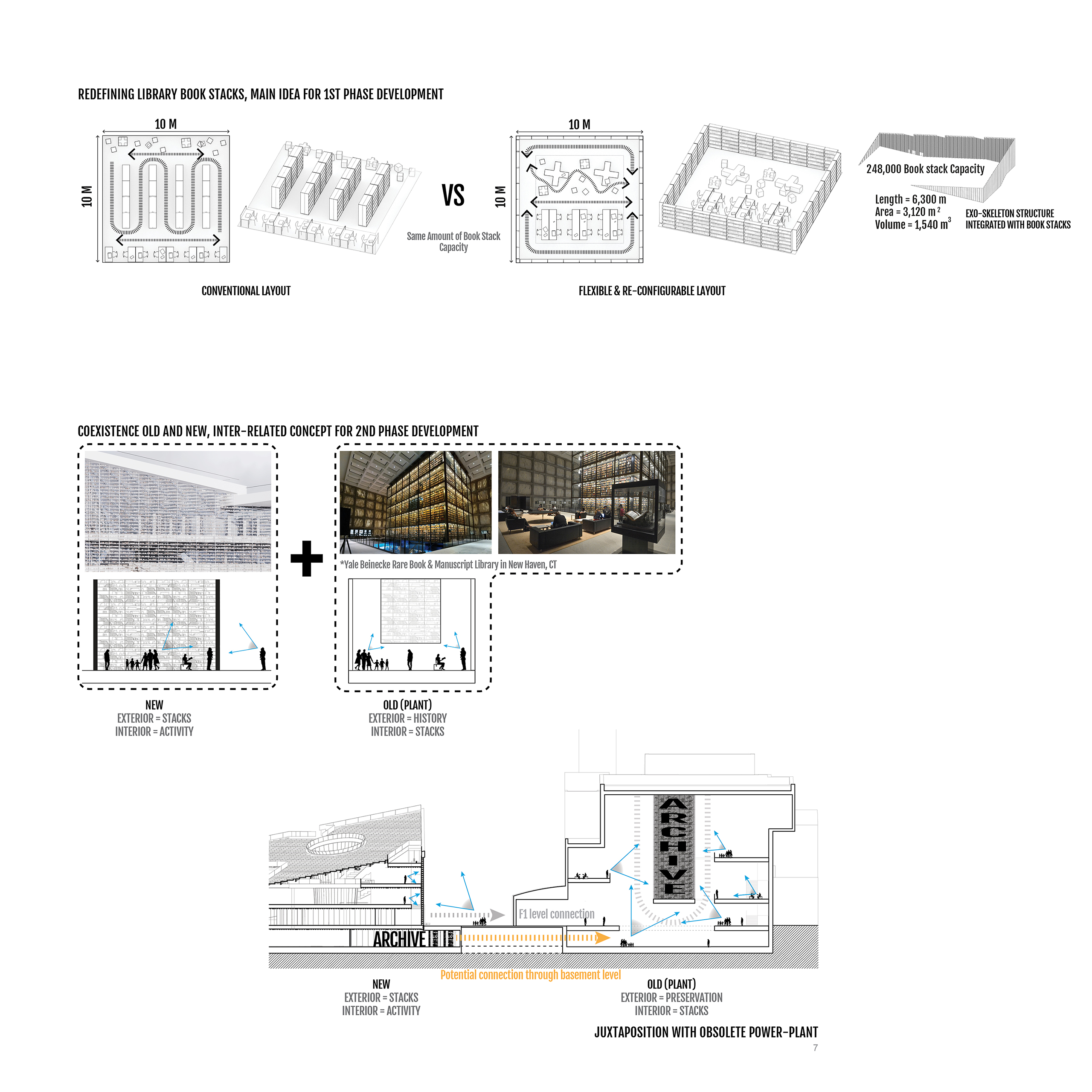 3. Wind enhancement design approach
Lowering the level of the ground does not only align the building to the acceleration of the wind into the circular void but also attracts visitors from the Gwangju-cheon stream is located in North yet connecting east and west Gwangju historically. The shallow reflecting pool on the lowered ground accelerates the wind from North in summer season and raised north-east corner of the building allows wind to penetrate into the circular void and improves interior wind ventilation, integral for the summers in Gwangju, mostly hot and humid.

4. Environment, Minimal Intervention
The skylight of the south side is composed of frosted glass, which allows indirect natural light to the library, and the remaining east, west and north bookcase facades allow to have a consistent indirect light as well. Through a gap among books on facade from inside, visitors look out Gwangju-cheon stream. 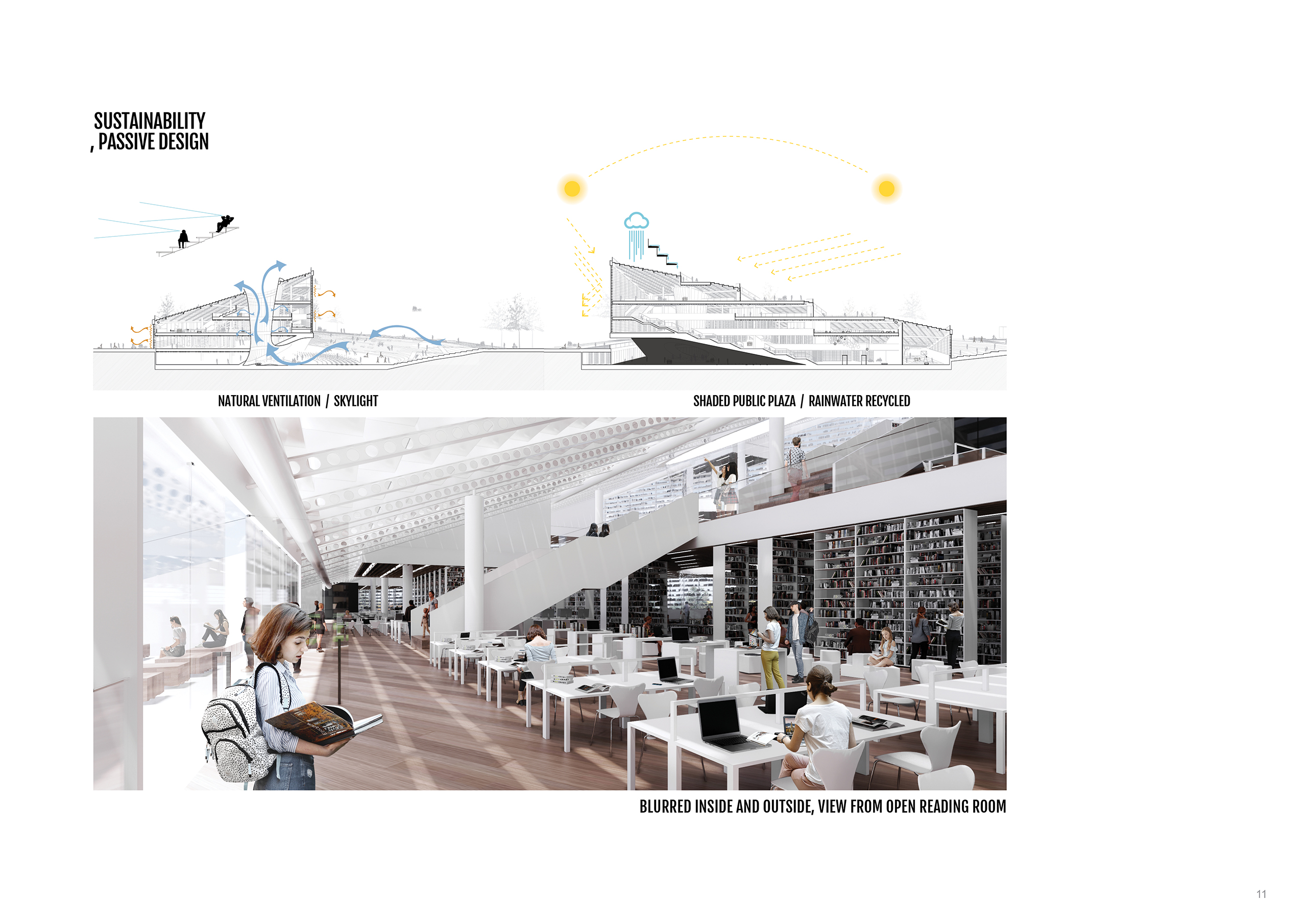 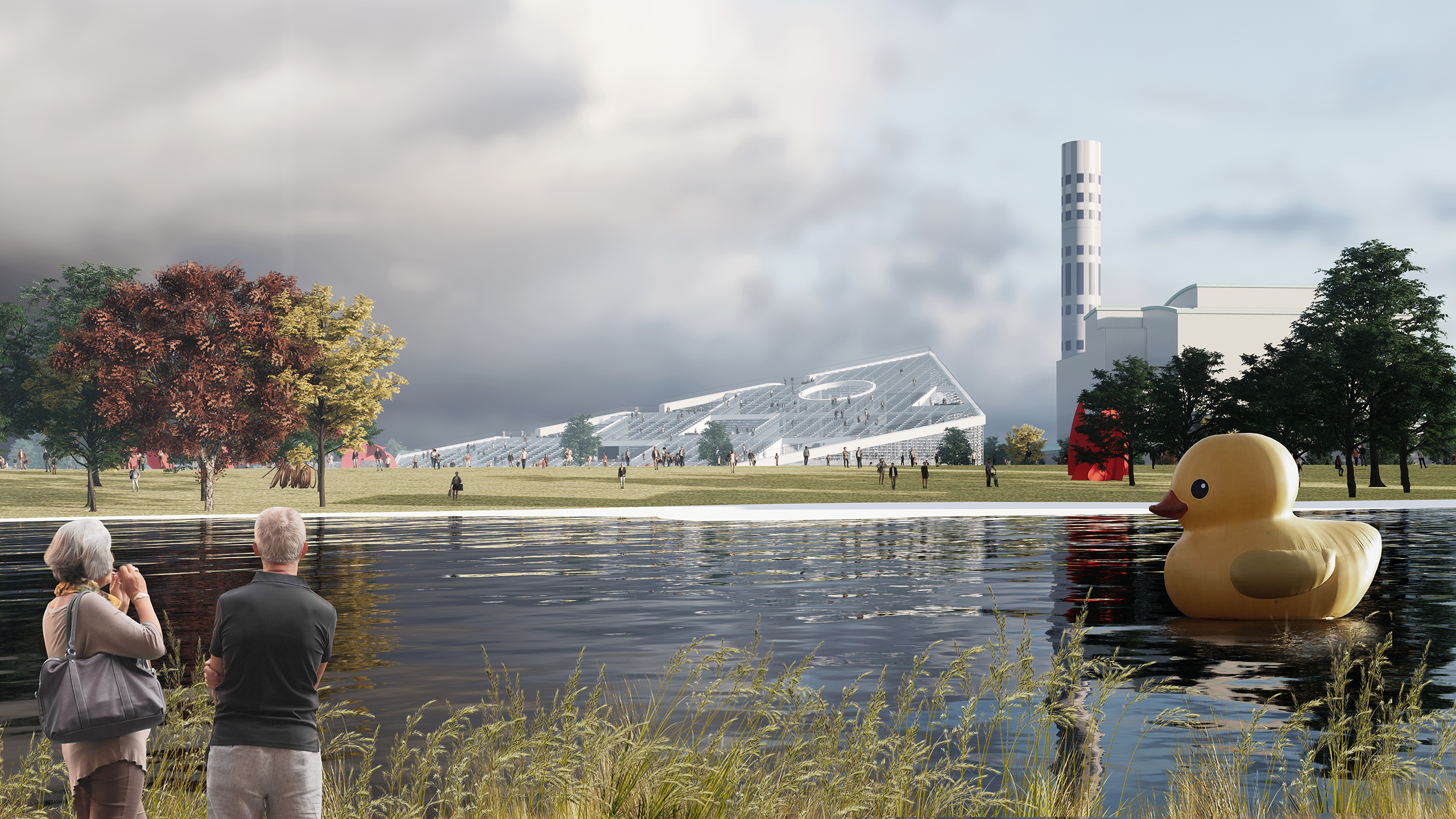 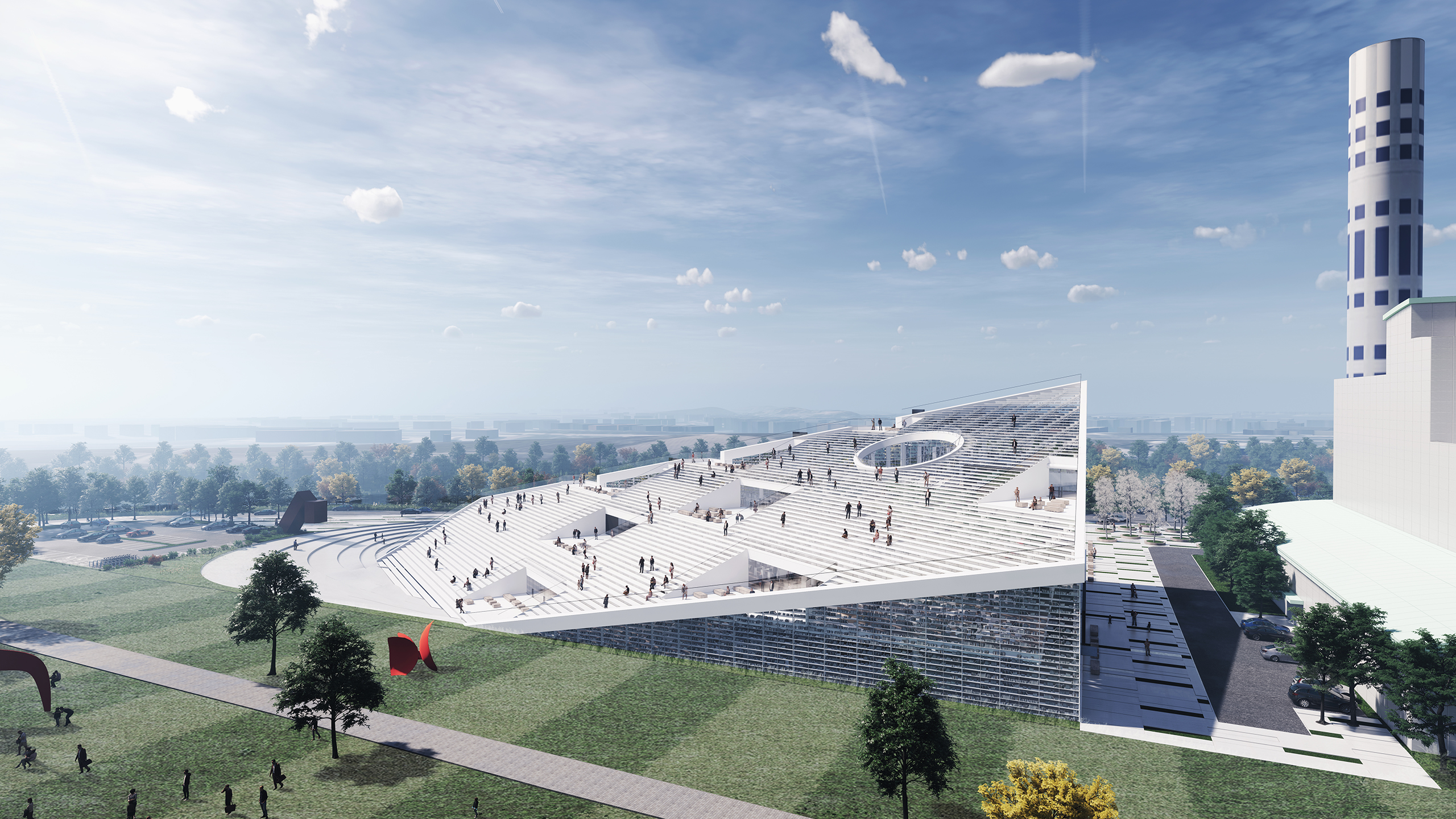 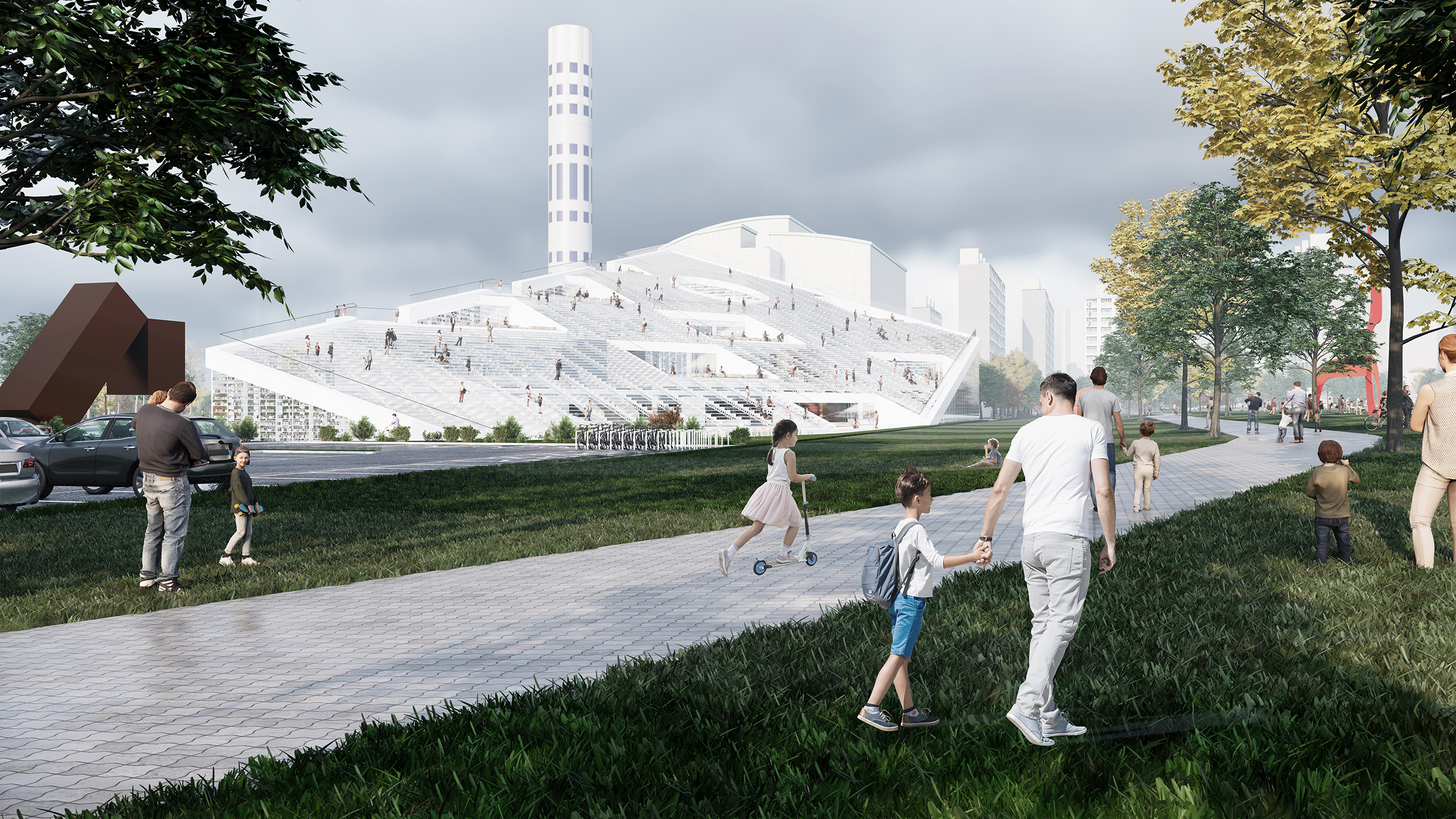 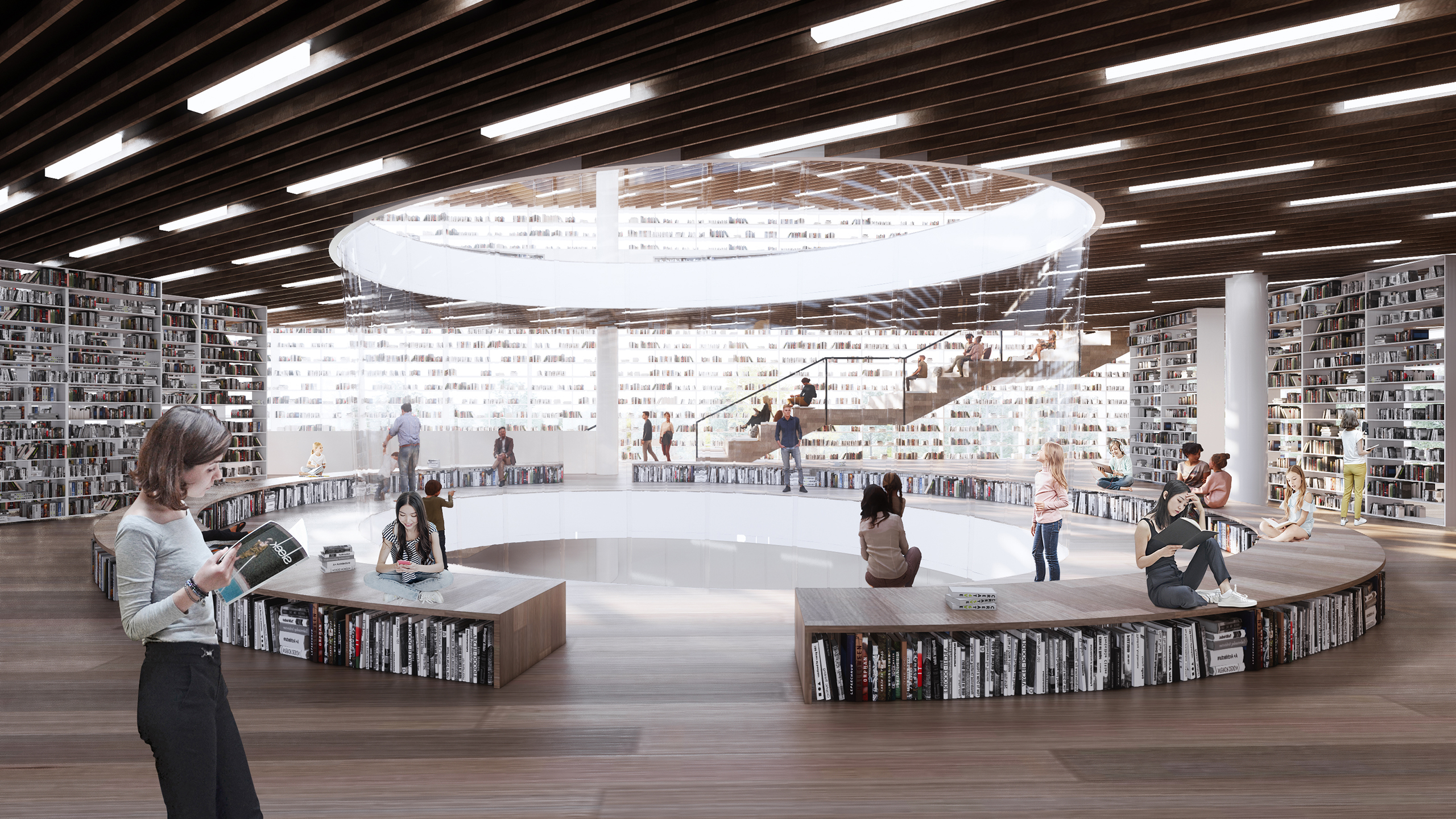 5. Program
Reading desks which have the advantage of two storey heights on the south side have open views and daylight, yet bookshelves were located behind the row of desks under one storey height area for access with convenient.
The entire building facade consists of bookshelves and it allows to accommodate more shelves for books. The facade itself is identified as a collection of books in an urban context. 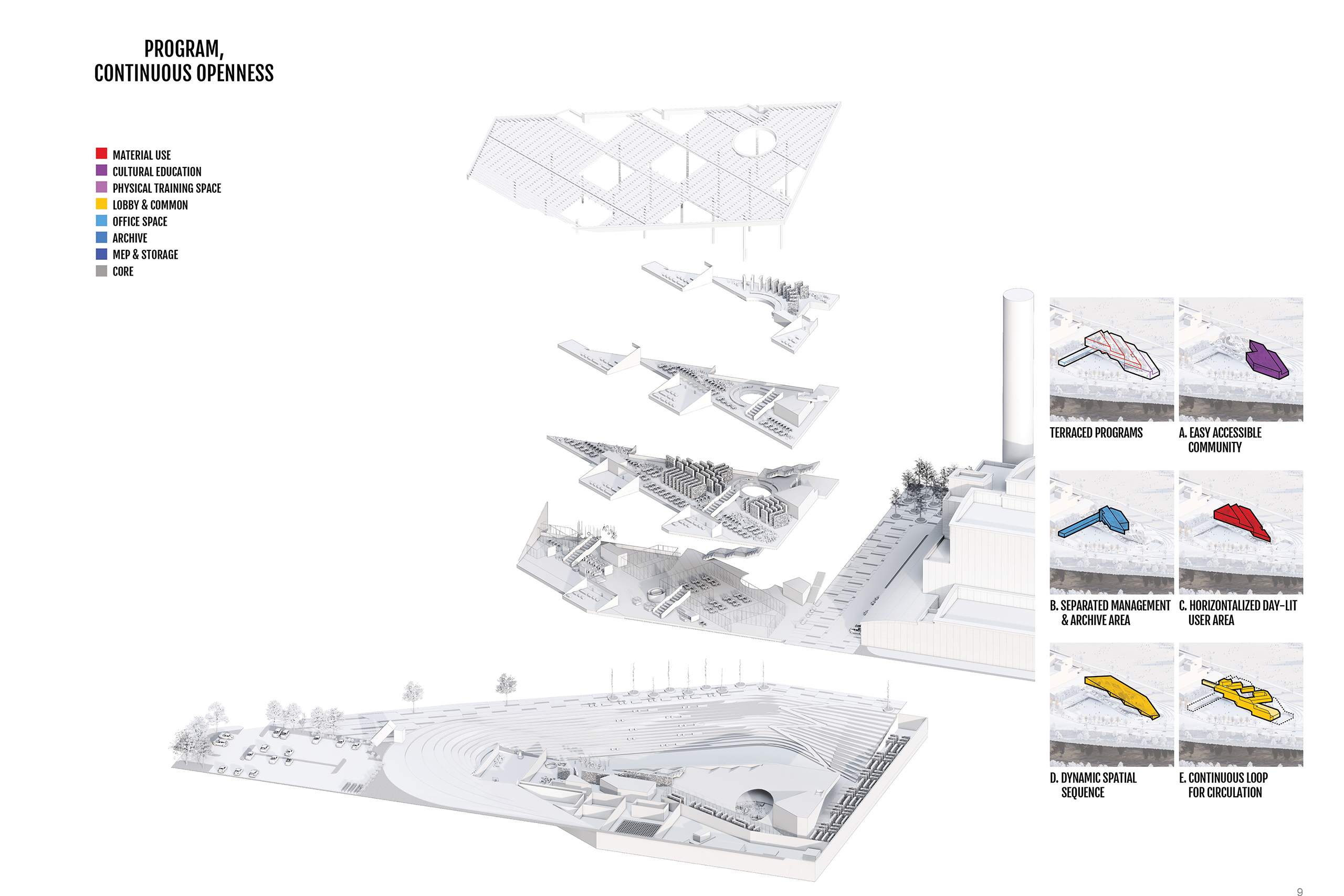 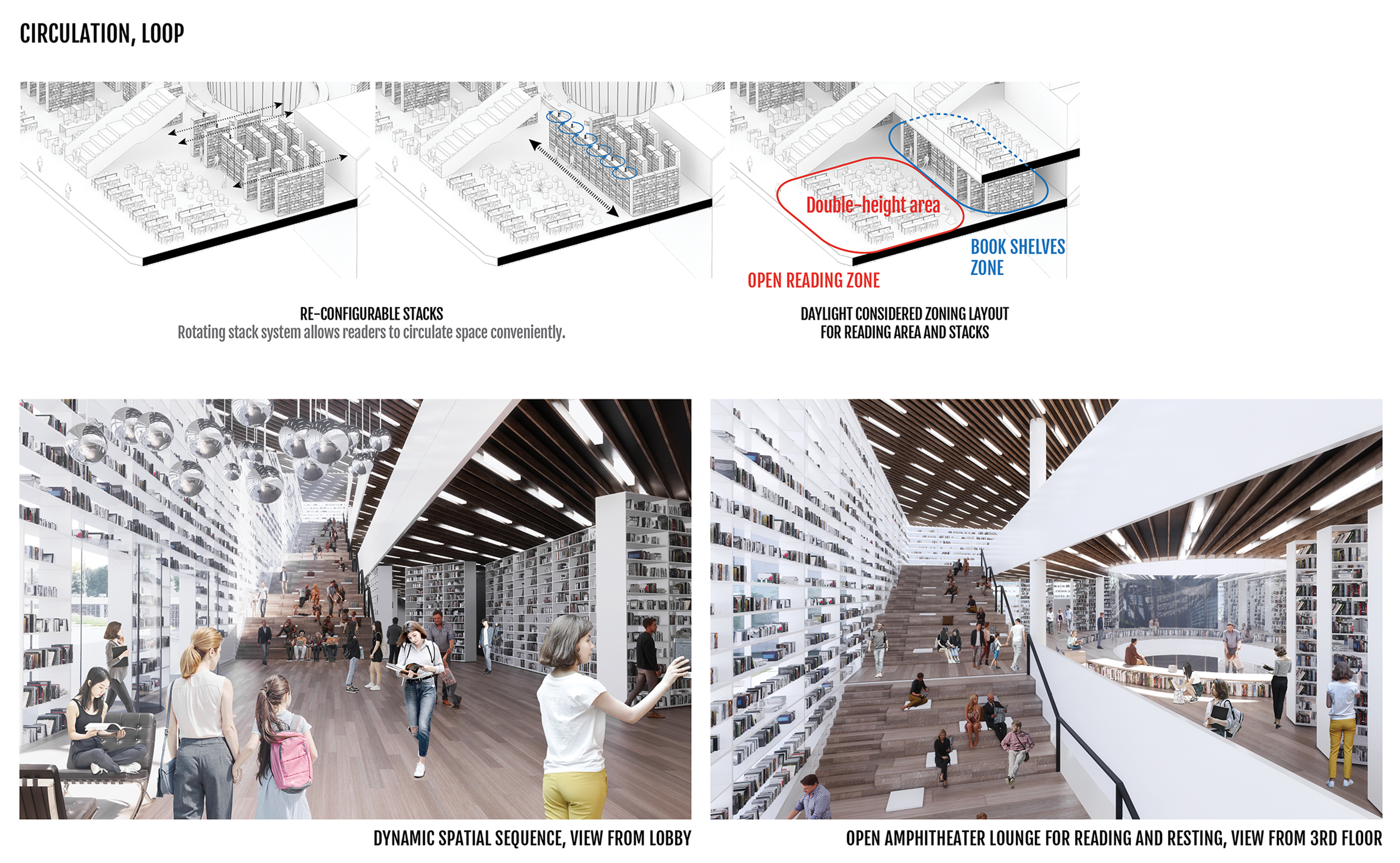 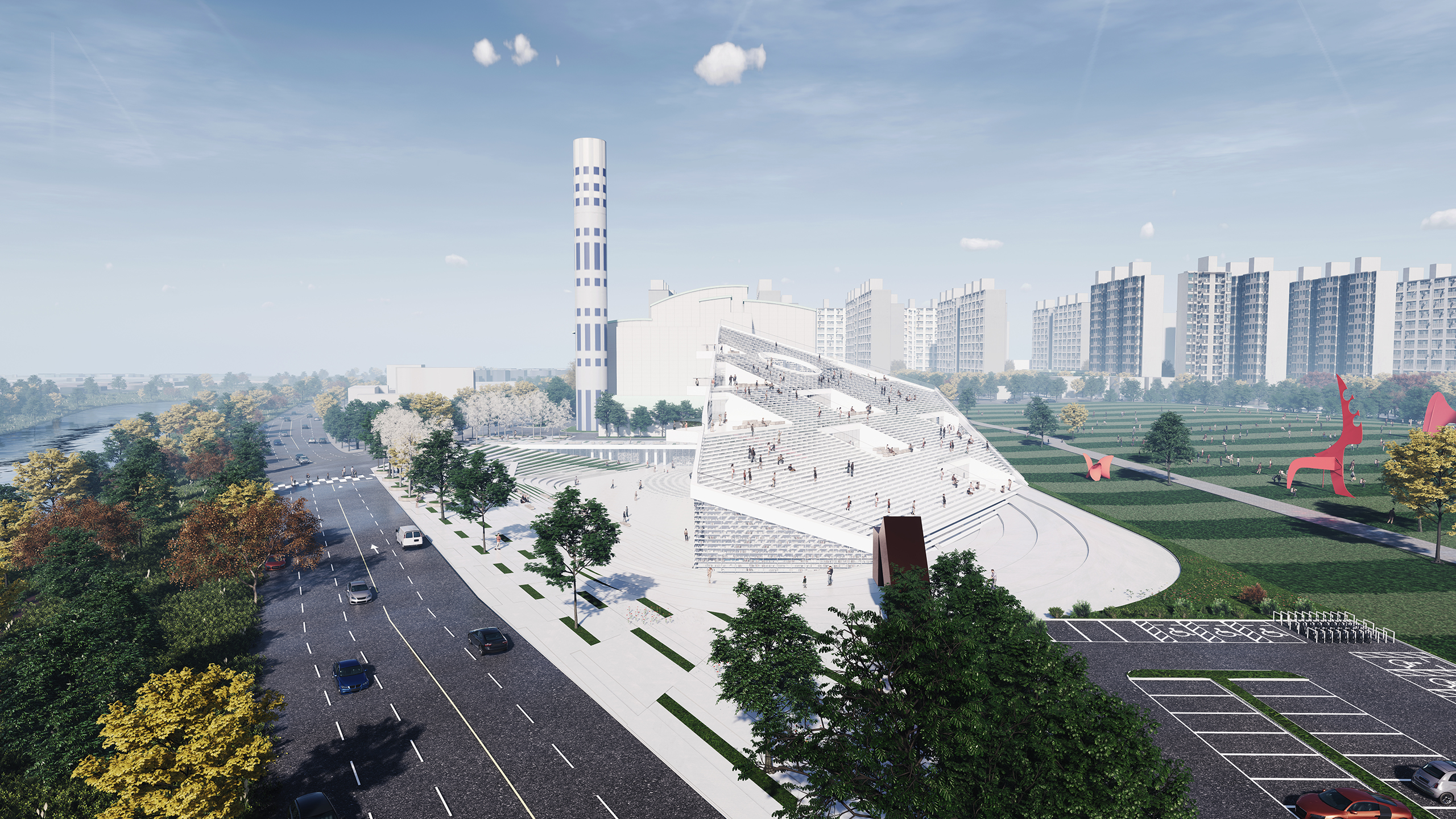 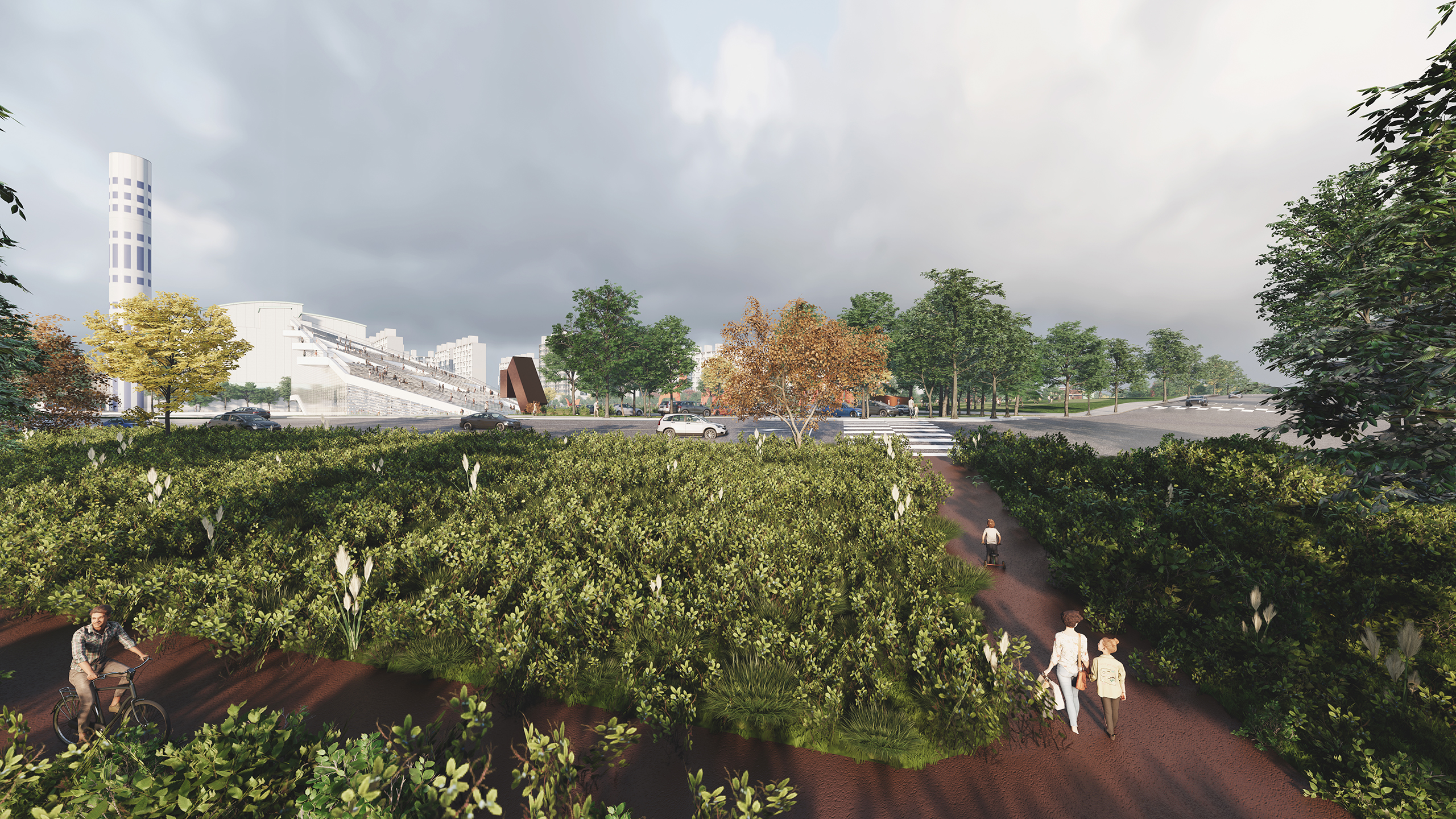 ACTING AS AN ATTRACTOR FOR GATHERING, VIEW FROM PEDESTRIAN PATH IN GWANGJU-CHEON

REFLECTING THE OLD(Power-plant) IN THE NEW, VIEW FROM NORTHWEST

7. Sustainability, Passive Design
1) NATURAL VENTILATION
Avoid accumulation of heat and pollutant inside building.
2) SKYLIGHT
The facade combines minimum solar gain and glare with maximum daylight and translucency. The passive shading will reduce the cooling needs, AC energy consumption.
3) SHADED PUBLIC PLAZA
Underneath space of the floated mass provides shade and a cool place to rest from the summer sun.
4) RAINWATER RECYCLED
A system of drains underneath the roof steps collects rain then carried down to storage tanks in the basement level. This grayed water can be recycled for flushing. 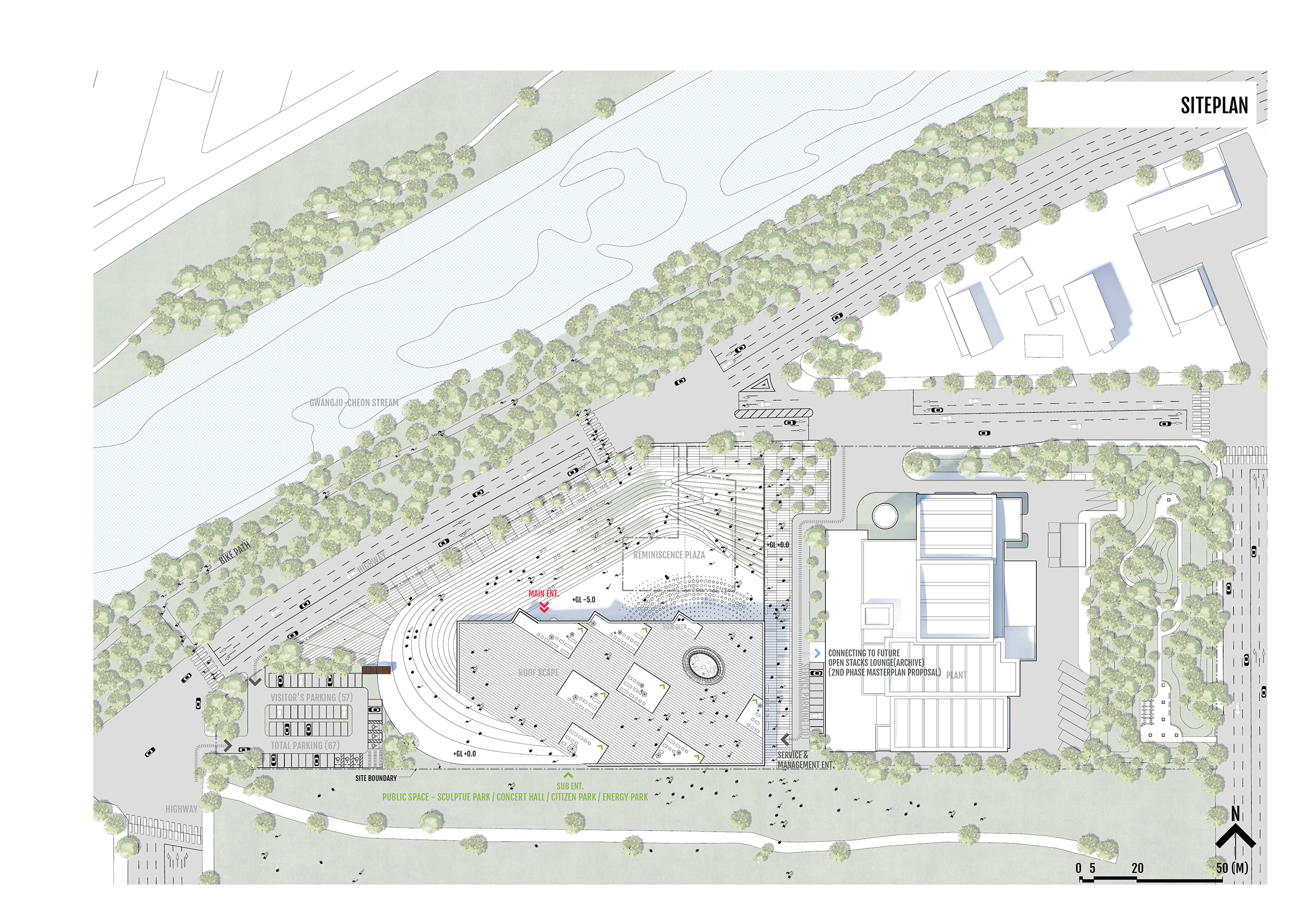 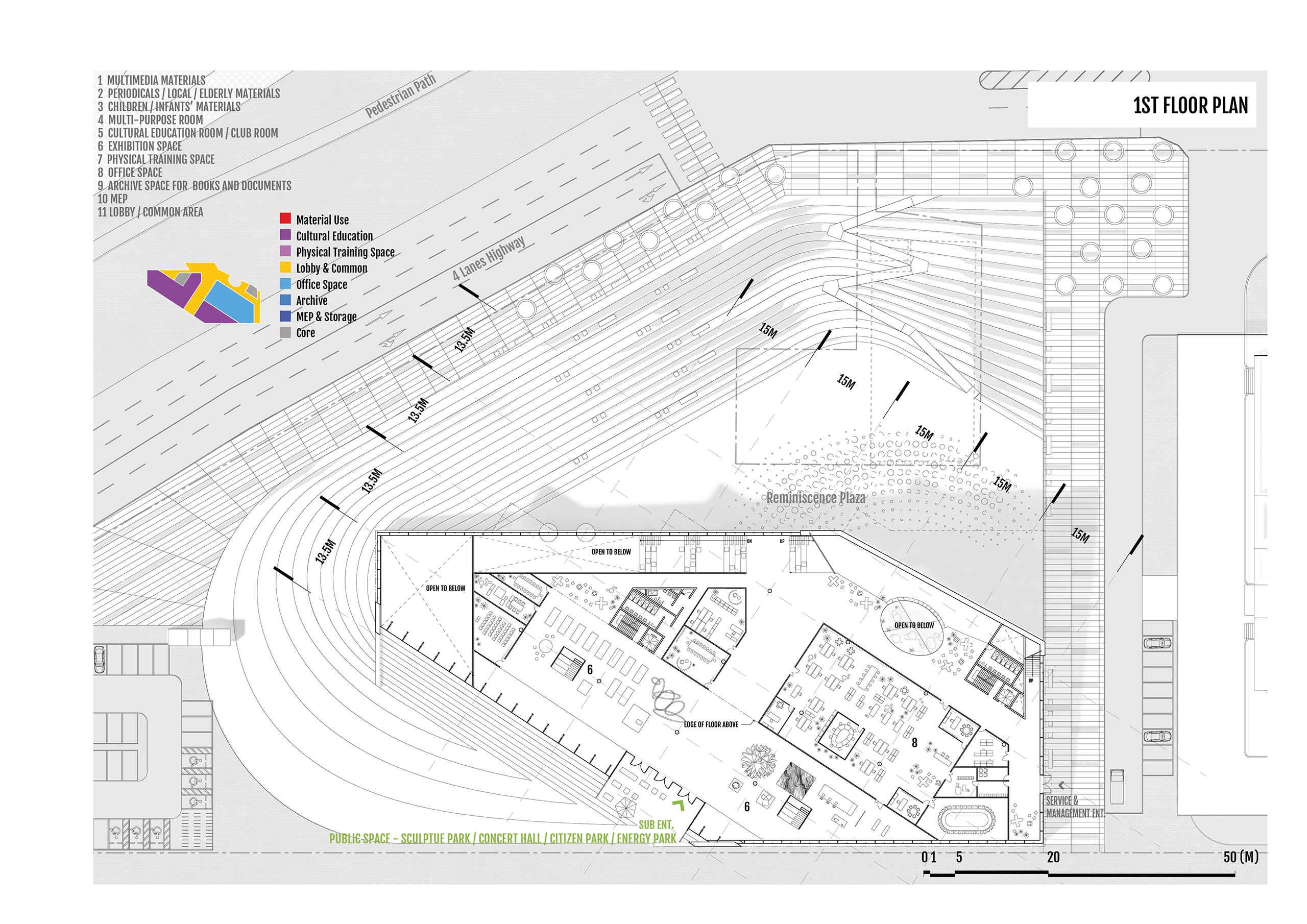 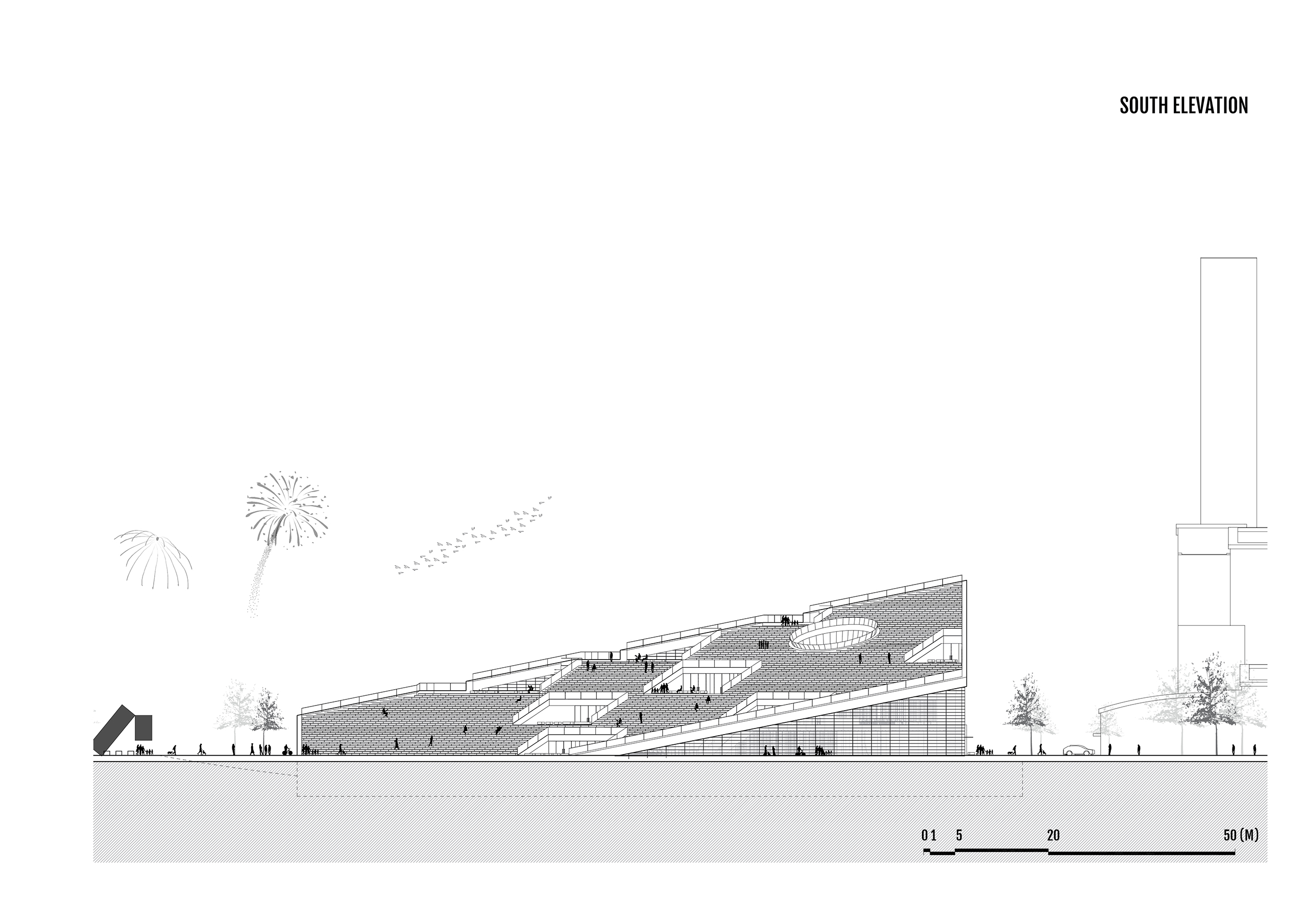 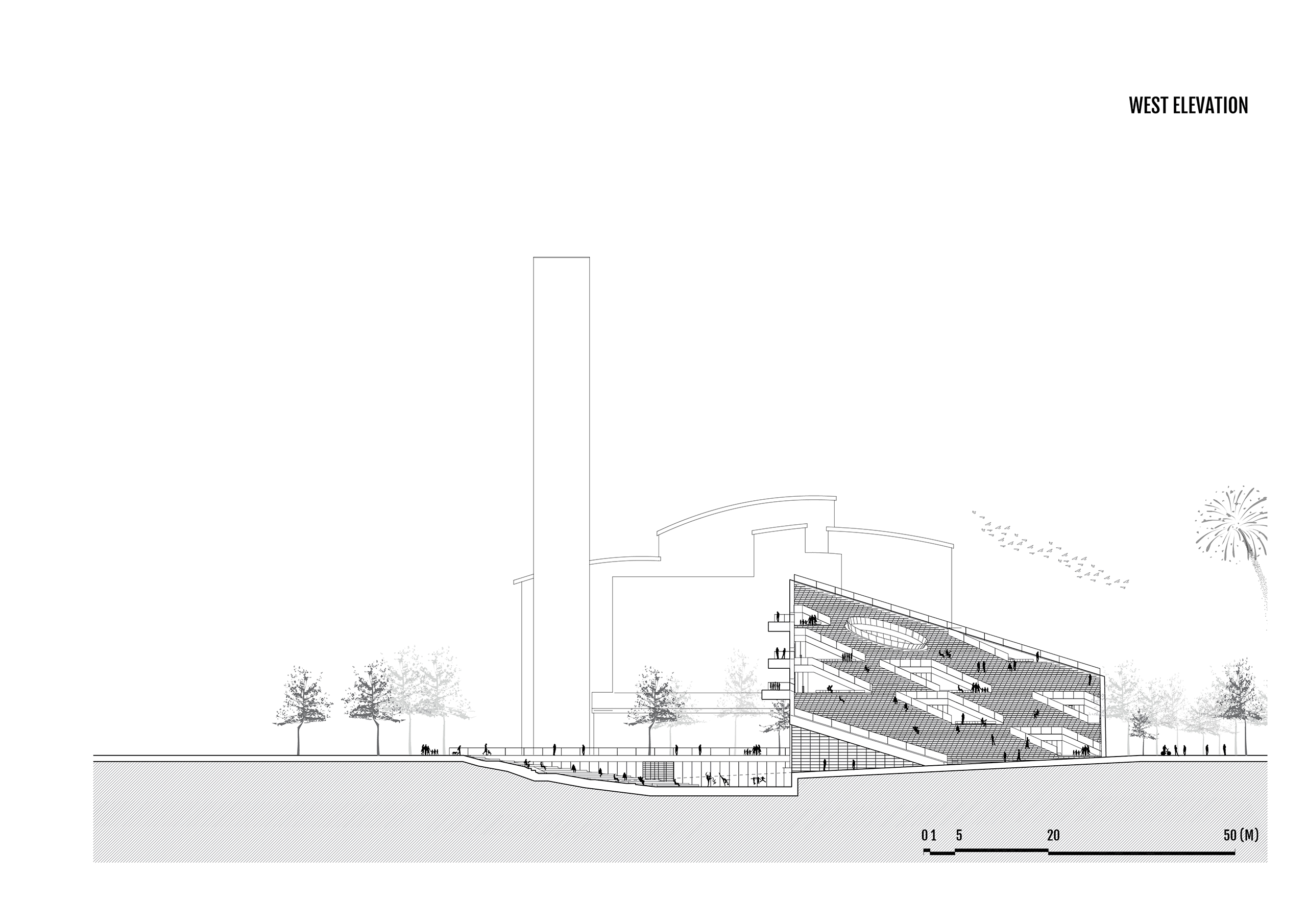 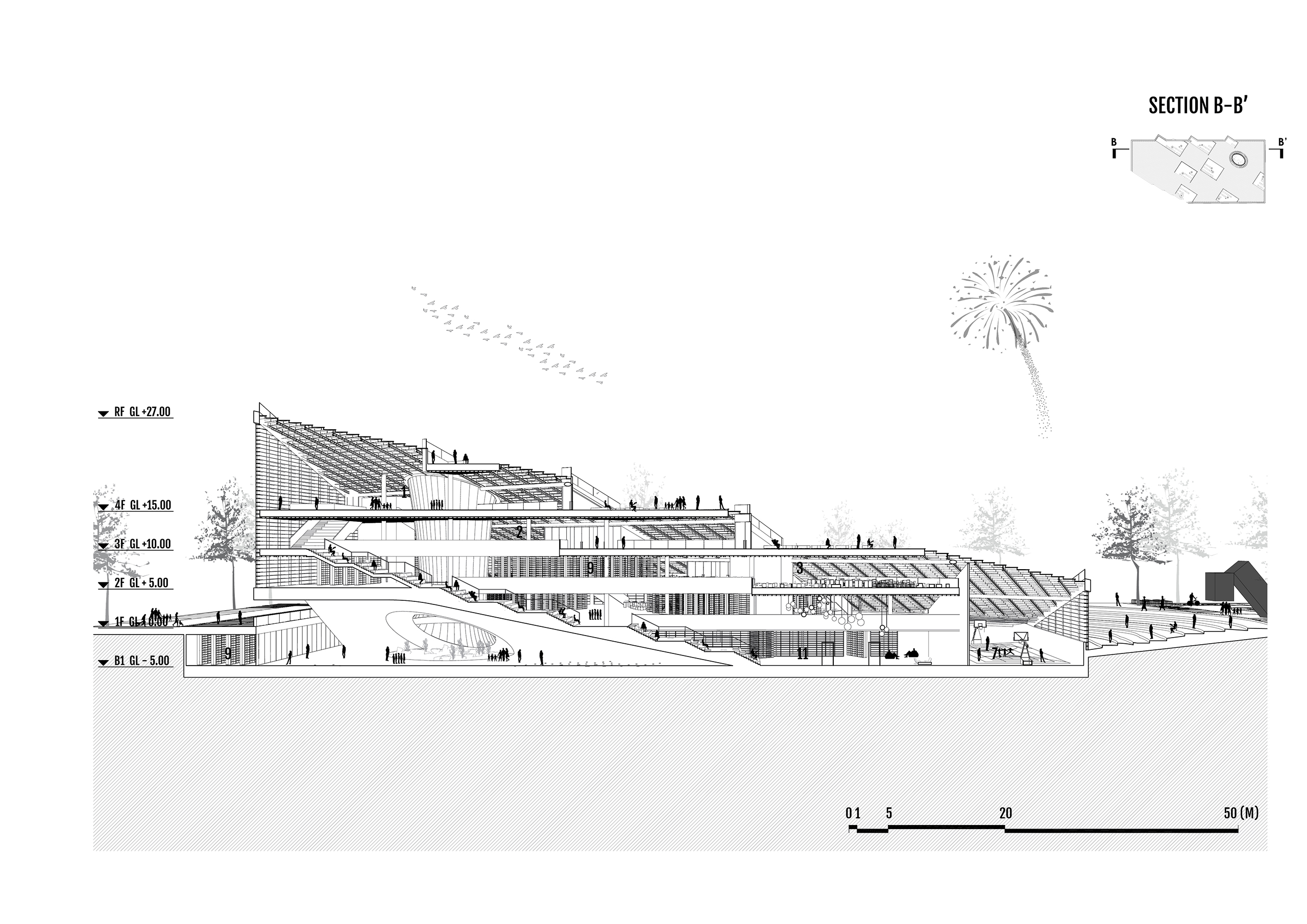 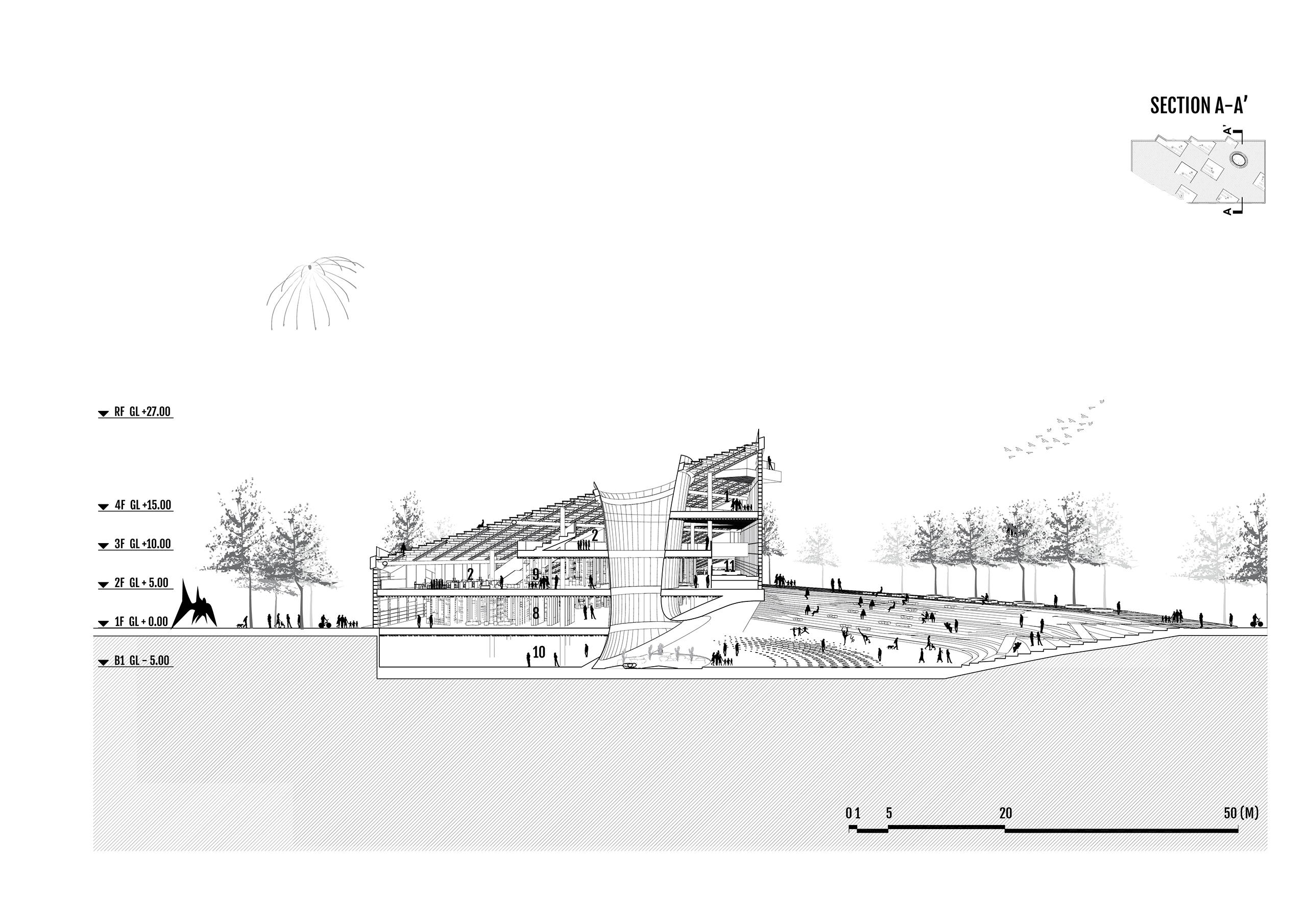 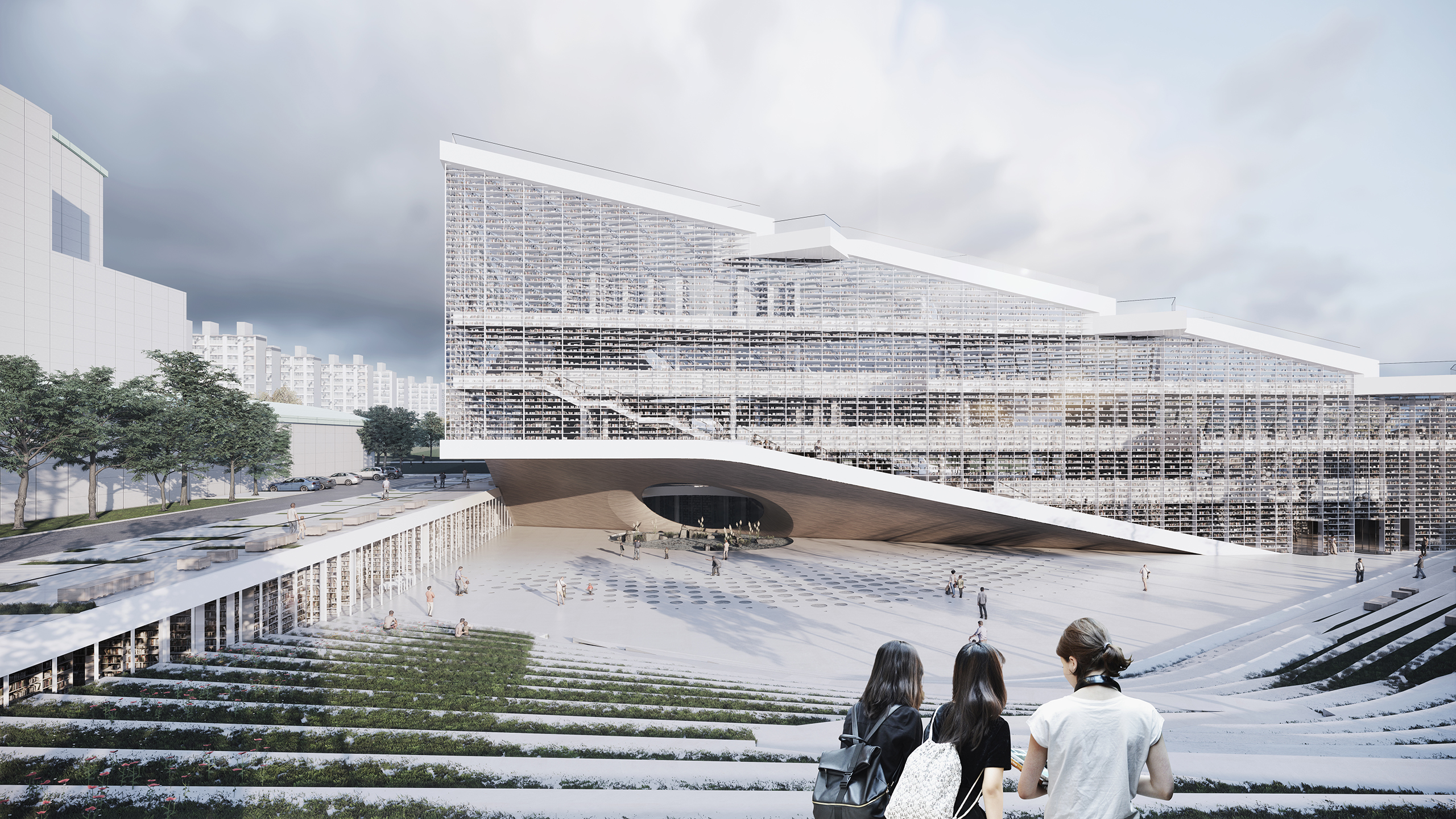 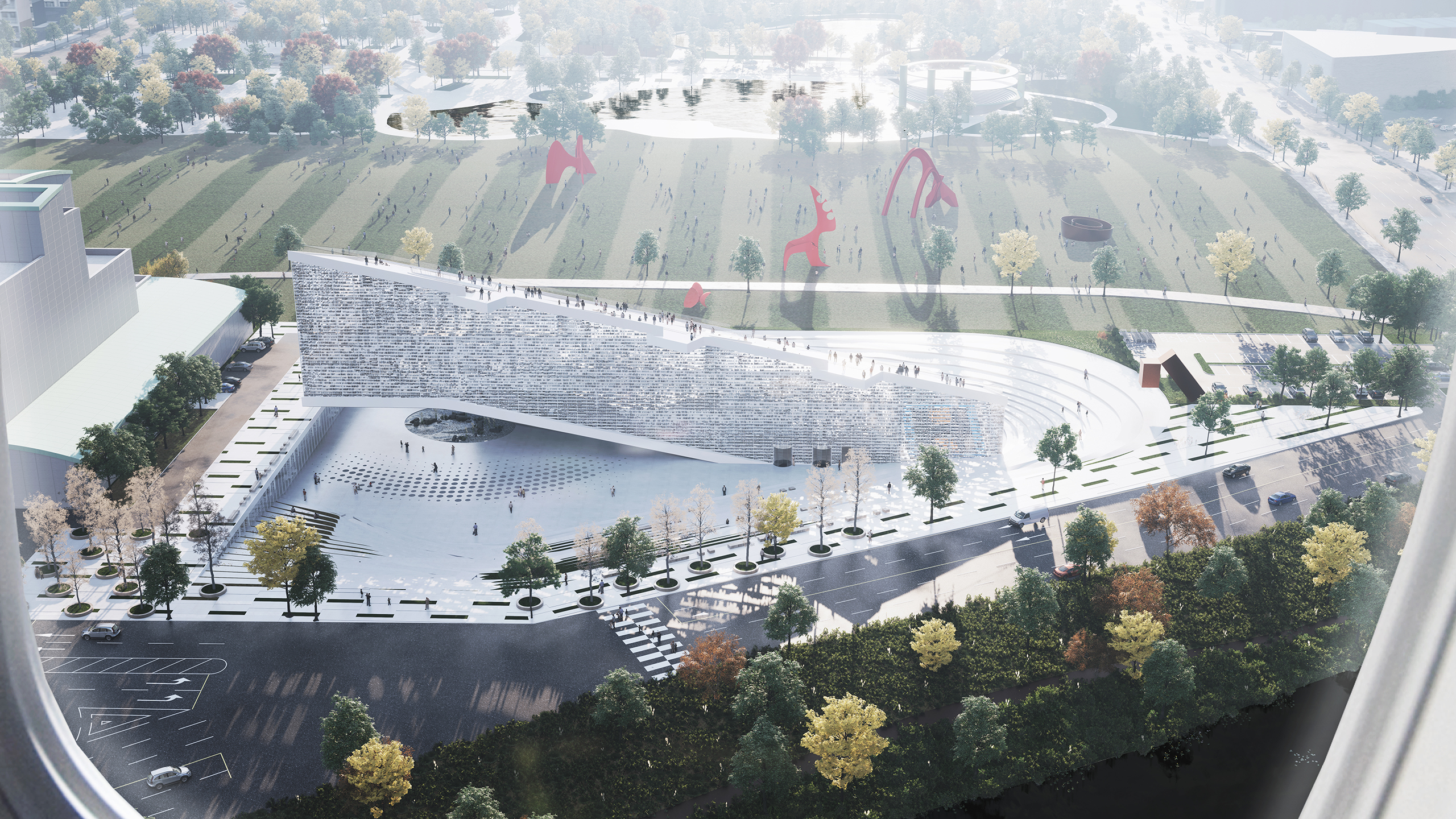 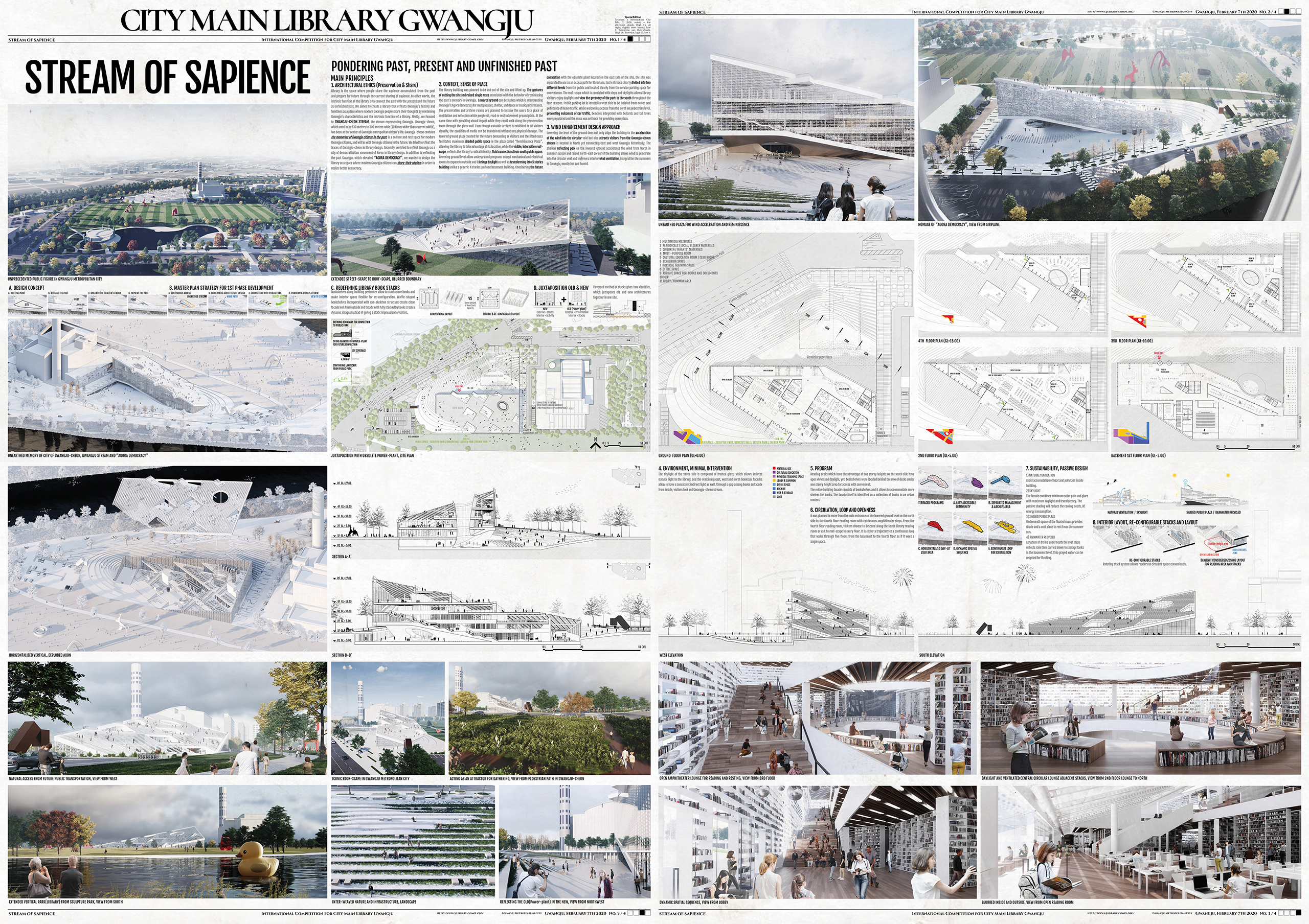 Submission Boards (4 x A1 Board)

Can find other winning entries including the 1st prize winner at official competition website:

And here is the captured PDF for some of visitors cannot reach out to official website: 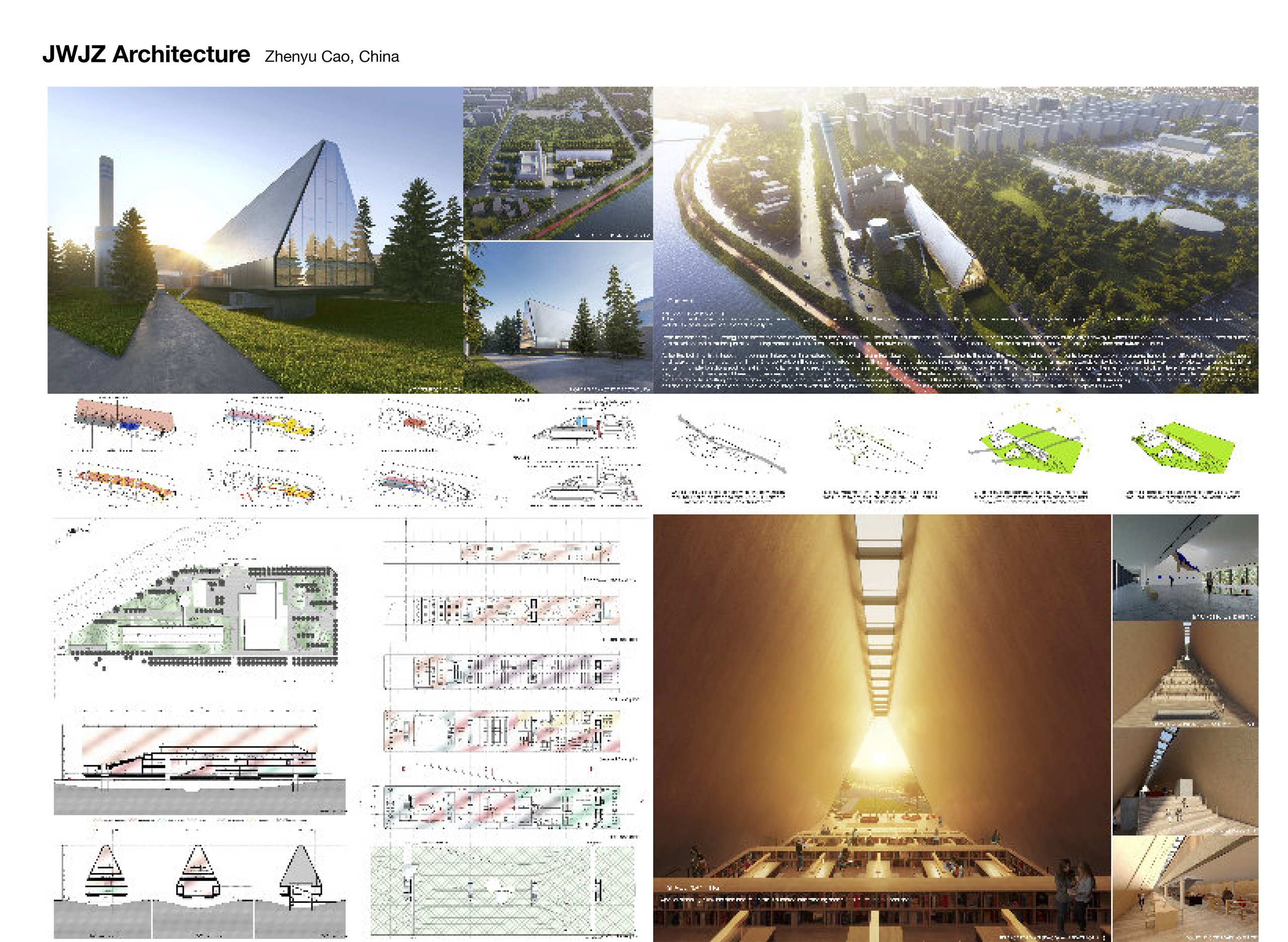 PONDERING PAST, PRESENT AND UNFINISHED PAST